Spoonerisms for the soul

Spoonerisms for the soul

You may all be forgiven for missing this momentous occasion, since I did too, but July 22 was the 175th birth anniversary of the Oxford don and ordained minister Rev William Archibald Spooner, who unwittingly gave his name to the most delightful of English language errors, known for a century and a quarter as spoonerisms.

Rev Spooner was famously absent-minded and tended, in his abstracted way, to switch unintentionally the vowels or consonants in two words in close proximity. Thus, intending to say, “The rate of wages will press hard upon the employer,” the Reverend declared in a lecture, “The weight of rages will press hard upon the employer.” As a preacher he referred to “conquering kings” (a phrase from a well-known hymn) as “Kingering Kongs”. These two are in fact the only examples authenticated as having been actually uttered by him, but his reputation, enhanced by mischievous Oxford undergraduates, spawned an entire cottage industry of invented spoonerisms.

Far from being unintentional mix-ups, they were created entirely intentionally for humorous purposes. The most famous, because it was both plausible and hilariously funny, was that in a toast to Queen Victoria, Spooner—instead of raising his glass with the words “Three cheers for our dear old queen!”—invited those present to give “Three cheers for our queer old dean!”

Another example has him saying “The Lord is a shoving leopard” instead of “The Lord is a loving shepherd”. In these stories, Spooner renders a “crushing blow” as a “blushing crow”, calls a well-oiled bicycle a “well-boiled icicle” and describes a “cosy little nook” as a “nosey little cook”. But most of the famous spoonerisms are apocryphal. The Oxford Dictionary of Quotations (third edition, 1979) lists only the “weight of rages” as a substantiated spoonerism.

The Oxford provenance of most of these invented spoonerisms is apparent in their content. Thus the Reverend, wanting to find out “Is the Dean busy?”, asks “Is the bean dizzy?” Going to church and seeing his customary place in the pew taken, he intends to ask an usher to show him to another seat, but instead says: “Someone is occupewing my pie. Please sew me to another sheet.” And the most brilliant of all has an indignant Spooner dismissing an errant undergrad from his presence with the words: “You have hissed all my mystery lectures. You have tasted a whole worm. Please leave Oxford on the next town drain.” (“You have missed all my history lectures. You have wasted a whole term. Please leave Oxford on the next down train.”)

The appeal of the spoonerism is that it is a rich source of humour even when it has nothing to do with Oxford or the queer old dean himself. For example: “I’d rather have a bottle in front of me than a frontal lobotomy.” There is something hilariously accurate about describing a bad grilled cheese sandwich as “a chilled grease sandwich”. The Washington, D.C. political comedy sketch group Capitol Steps famously referred to President Reagan as “Resident Pagan” and described US elections as “Licking their Peaders” (picking their leaders). The spy wars with Russia were described as the CIA not “snooping on Putin” but “poopin’ on Snutin”.

That indispensable source of research material, the internet, tells me that in his poem Translation, Brian P. Cleary describes a boy who speaks in spoonerisms. Humorously, Cleary leaves the poem’s final spoonerism up to the reader when he says:

He once proclaimed, ‘Hey, belly jeans’

When he found a stash of jelly beans.

But when he says he ‘pepped in stew’

We’ll tell him he should wipe his shoe. 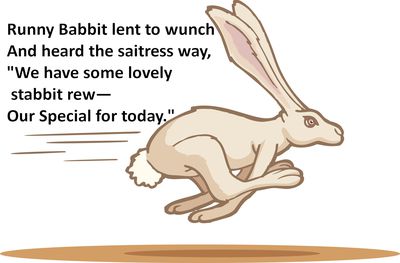 This entry was posted in Humour, Nostalgia, People, Social Commentry. Bookmark the permalink.