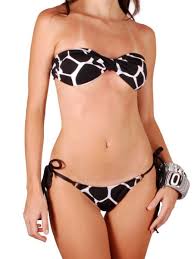 Evolution of bikini and what has made it a favourite with men and women alike.

Today, the bikini turns 66. In its lifetime, the bikini has outlived bellbottoms, baggie pants, polka-dotted shirts and many other fashions

Here is a piece tracing the evolution of this scanty piece of clothing:

America explodes an atom bomb over Bikini Atoll Island, in the Pacific. The tests are widely reported across the world.

In a quest to create the world’s shortest swimwear, French automotive engineer, Louis Reard designs the first modern bikini. He names it after the atomic tests conducted 4 days ago. The bikini had a cold reception in the US.

Eighteen-year-old french actress Brigitte Bardot appears in a bikini in the movie Manina. Fashion gurus believe she was largely responsible for popularizing bikinis in the US.

“This bikini made me into a success. As a result of starring in Dr No, I was given the freedom to take my pick of future roles”, said Ursula Andress, in 2001.

Ursula Andress makes a splash by walking out in a white bikini in the 1962 James Bond movie Dr No. In 2001, the bikini was auctioned for $61,500 at a Christie’s auction.

Bikinis are also credited with giving birth to suntanning and Brazilian waxes. In 1987, a salon called J Sisters opens in Manhattan and popularises Brazilian waxing in the US.

The bikini becomes the official uniform of women’s Olympic volleyball. Teams like Australia opposed the move calling it “exploitative.”

Opposition to the MISS WORLD contest in Bangalore led to shifting of the swimsuit round to Seychelles.

The mankini, a bikini for men, was popularised by Sacha Baron Cohen when he wore it at the Cannes Film Festival. Thankfully, it is nowhere as popular as the bikini. 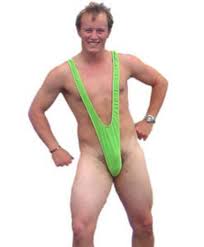 $13 billion is the size of swimwear industry. Govts across the world (Malaysia, Egypt, Kuwait) have either banned wearing it in public or have spent a lot of time debating a ban.

Even in the western world, bikini-wearing is banned in public places like parks and streets.

This entry was posted in Current Affairs, Humour, Social Commentry. Bookmark the permalink.