Here is a nice article from today’s Financial Express:

Mumbai: One ofIndia’s most iconic brands Amul, owned by the Gujarat Co-operative Milk Marketing Federation, is in its 50th year. The brand’s mascot — the round-faced little girl in a polka-dotted frock with a matching bow in her hair — has over the years, served as an inimitable chronicler of our life and times.The Amul ad campaign has now gone international, throughDubai’s top English daily Khaleej Times. These ads, created by the Mumbai-based advertising agency DaCunha Communications, already appear in 25 Indian newspapers twice a week, and are aired by six television channels and are spread across 190 billboards in the country. It also reaches out to over 15 million people through the social media.

Over the past five decades, Amul has not only beenIndia’s most favoured butter brand but also its most trusted social commentator. Through its topical toons and witty slogans week after week, it has celebrated the country’s heroes, taken classy digs at social ‘villains’ and tirelessly won over consumers with its razor-sharp wit and tongue-in-cheek humour.“The real history of India is not contained in history books but in Amul’s advertising campaigns,” says ad legend Alyque Padamsee, who created the iconic Liril girl for Hindustan Lever (now Hindustan Unilever) in 1975. “Amul’s ads have become an essential part of the country’s social heritage. Its lingo is everywhere,” he says. RS Sodhi, the managing director of Gujarat Co-operative Milk Marketing Federation, a client who has stood by its creative agency through thick and thin proudly said, “Amul’s advertising reflects the nation’s history over the last 50 years.”

What makes Amul ads so successful and appealing? “Amul is typically Indian in its idiom and the sentiment it evokes,” says Harsha Bhogle, cricket commentator and TV presenter. “Its creative consistency is legendary.” Down the decades, the Utterly Butterly Amul girl has, quite literally, became the toast of the nation. In an increasingly humour-unfriendly era, she manages to stand out and tickle the nation with her charming takes on daily issues. Through her eyes, even the mundane becomes interesting.

The Amul girl was created as a response to rival brand Polson’s butter-girl. The idea was conceived in 1967 and executed by Sylvester Da Cunha, the founder-chairman of DaCunha Communications, and his art director Eustace Fernandez. They started advertising through hoardings, painted bus panels and posters in Mumbai. “The great thing about the Amul girl is the round face that can be easily adapted to be anybody,” says Sylvester DaCunha. “With Manmohan Singh, put a turban on her. With Indira Gandhi, give her a white streak. So it’s a supremely adaptable creation.” To celebrate her 50th birthday, Amul and DaCunha Communications have launched a coffee table book. Published by HarperCollinsIndia, the book traces the country’s social, political and cultural evolution through the eyes of the Utterly Butterly Delicious Amul girl. 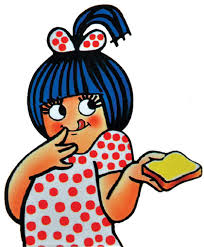 This entry was posted in Cartoons, Comments to print media, Nostalgia. Bookmark the permalink.