Of Blondes and Brunettes …

Of Blondes and Brunettes

For the dummies, a blond or blonde is a hair colour characterized by fair-hair which indicates low levels of a dark pigment called eumelanin. The resultant visible hue depends on various factors, but always has some sort of yellowish colour. The colour can be from the very pale blond to reddish “strawberry” or golden-brownish (“sandy”).Generally the term is used for girls with golden hued hair.

Further, girls with brown hair are often referred to as brunettes, the feminine form of the diminutive form brunet from the word brun (brown/brown-haired).

During my college days, I recall having enjoyed a movie titled “Gentlemen Prefer Blondes” ( It was a 1953 film adaptation of the 1949 stage musical, released by 20th Century Fox, directed by Howard Hawks and starring Marilyn Monroe and Jane Russell, with Charles Coburn, Elliott Reid, Tommy Noonan, Taylor Holmes, and Norma Varden in supporting roles.).This comedy film, was both a critical and commercial success at the time of its release.

You can read about the story and the movie plot by going to: http://en.wikipedia.org/wiki/Gentlemen_Prefer_Blondes_(film)

The blonde stereotype, the stereotypical perception of blond-haired women, has two aspects. On one hand, over the history, blonde hair in women has been considered attractive and desirable. On the other hand, a blonde woman is often perceived as making little use of intelligence, as a “woman who relied on her looks rather than on intelligence.” It can be used as a popular culture derogatory stereotype to use hair colour as an indication of intelligence. This stereotype is utilized in blonde jokes. Blonde hair is also a physical trait often associated with “bimbos,” attractive women perceived as unintelligent or uneducated. In short, blondes are considered beautiful but stupid or dumb creatures and traditionally, they have been the butt of many jokes. Blonde jokes nearly always take the format of the blonde placing herself in an unusual situation, performing a silly act because she misconstrued the meaning of how an activity is supposed to play out, or making a comment that serves to highlight her supposed lack of intelligence, lack of common sense, or cluelessness, or promiscuity.

Sample a few such jokes:

2. Q: How do you make a blonde’s eyes Twinkle? A: You shine a torch light in her ear.

4. Q: How do you measure their intelligence? A: Stick a tire pressure gauge in their ear.

5. To amuse a Blonde for hours, give her a sheet of paper with ‘Please turn over’ scribbled on both sides.

6. Q: Why do blondes love lightning? A: They reckon somebody is taking their photo.

Now why this sudden interest in blondes and brunettes, you may ask. Well today, the media was full of a news report about a recent research. Here is the delicious news item:

London, Jan 2 (ANI): A study led by an Indian-origin researcher has found that while men are more likely to chat up with blondes on a night out, they actually find brunettes more attractive. University of Westminster researchers sent a woman to three London nightclubs with her hair dyed brunette, blonde and then red, and watched how many men approached her. They then returned to the clubs and asked 130 men to rate pictures of her in the three guises. She was chatted up the most as a blonde. But she was rated most highly for attractiveness and intelligence when brunette. Viren Swami said that his results may reflect a shift in fashion, with brunettes now being idealised in the way that blondes were several decades ago. “In the Sixties and early Seventies, when Jackie Kennedy was the ideal, brunette hair became the ideal for women generally. Then, in the Seventies and Eighties, blondes became the ideal,” the Daily mail quoted Swami as saying. “But more recently, there has been a backlash against blondes and the dumb blonde idea has become dominant,” he said. As a blonde, the woman was chatted up 60 times in total. This compared with 42 approaches as a brunette and 18 as a red-head. “One possible explanation is that men were more likely to assume sexual intent on the part of our confederate when she was blonde,” he said. “Perceptions of the blonde confederate as being more needy may have reduced men’s fear or rejection or fear or an aggressive response, which increased their likelihood of approaching her as a blonde,” he added. It is also possible that men link blonde hair with youth and vitality, and so the ability to bear children. The study has been published in the Scandinavian Journal of Psychology. (ANI)

I wonder, whether these researchers have no other worthwhile subject matters to research about! Any way, it was a small dose of humour to lighten up my day. I may not be a gentleman, but still I prefer a blonde, for she amuses me a lot with her lack of so called common sense! Long live blondes!! 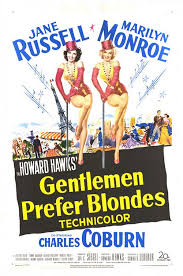 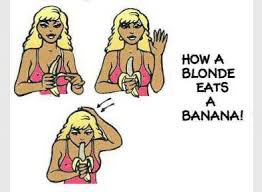 2 Responses to Of Blondes and Brunettes …