THE ARAB WORLD’S OWN DOLL..

THE ARAB WORLD’S OWN DOLL
Today is Children Day.Children love toys.Generally,little girls love playing with dolls. BARBIE Doll is immensely popular with girls.However,it is interesting to note that the Muslim world has its own version of Barbie. Here are the details.

FULLA DOLL ; Fulla is the name of an 11½ inch Barbie-like  fashion doll marketted to children of Islamic and Middle Eastern countries   as an alternative to Barbie. Her concept evolved around 1999, and she hit stores in late 2003. Fulla was created by a UAE manufacturer from Dubai called NewBoy FZCO. Fulla is also sold in China, Brazil, North Africa, Egypt, and Indonesia, while a few are sold in the United States. Although there had been many other dolls in the past that were created with a hijab, such as Razanne and Moroccan Barbie, none of them had ever been as popular as Fulla.

Fulla is a role-model to some Muslim people, displaying how many Muslim people would prefer their daughters to dress and behave. 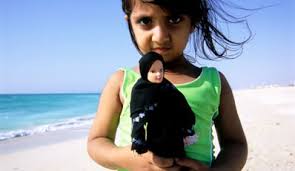 Appearance :At first, Fulla was developed to have long coal black hair streaked with auburn and brown eyes, but later, dolls with lighter hair and eyes were introduced. The product development team considered about 10 different faces before deciding on her look. She was dressed in a black abaya and head scarf for the Saudi market, but no veil in other markets; because the product development didn’t want to “go to extremes.” For more liberal countries, Fulla has a white scarf and pastel coat. Her outdoor clothes have since become more colorful, but her shoulders are always covered and the skirt always falls below her knees, as traditionally Muslim women are expected to dress conservatively. She can also be found wearing half- and quarter-sleeve dresses, but not sleeveless.

Barbie was banned in Saudi Arabia because she was seen to promote values not shared by society. In September 2003 the Middle Eastern country of Saudi Arabia outlawed the sale of Barbie dolls, saying that she did not conform to the ideals of Islam. The Committee for the Propagation of Virtue and Prevention of Vice stated, “Jewish Barbie dolls, with their revealing clothes and shameful postures, accessories and tools are a symbol of decadence to the perverted West. Let us beware of her dangers and be careful.”[ Fulla was created as an alternative for Barbie to reflect Muslim values. She is named for a fragrant jasmine flower found only in the Middle East. Her personality was designed to be “loving, caring, honest, and respects[ing of] her mother and father. She’s good to her friends. She’s honest and doesn’t lie. She likes reading. She likes, rather, she loves fashion. ” Fulla has two friends, Yasmeen and Nada, as well as a little brother and sister. An older protective brother is in development for her, as well as a teacher and doctor Fulla, which are two careers that Fulla’s creators believe to be respectable.

Fulla will not have a boyfriend, because traditional Muslims do not believe in romantic relationships out of wedlock. Fulla’s creators believe that Muslim parents become angry by the Western-inspired changes in views on sexuality, especially outside of marriage, meaning that Fulla is supposed to show traditional Islamic values and social order.She does, however, have many costumes, in addition to the hijab, that reflect the everyday wear of Muslim girls nowadays in some Middle Eastern countries that conform to Muslim values, yet are still considered fashionable in the West.

In Saudi Arabia, animated commercials display Fulla’s life, such as showing the doll saying her prayers as the sun rises, baking a cake to surprise her friend, or reading a book at bedtime. Abidin says that these scenes are “designed to convey Fulla’s values” and show what behavior Fulla is promoting. Often, her commercials begin with her singing in a high voice in Arabic: “She will soon be by my side, and I can tell her my deepest secrets“. Another series of commercials advertises her to be family-oriented, showing a group of Syrian actresses who display Fulla silverware, stationery, and accessories. Fulla’s commercials often promote modest outfits, as one of Fulla’s commercials had warned, “When you take Fulla out of the house, don’t forget her new spring abaya! “

Fulla and Barbie are alike in many ways, such as in size, and height, that Fulla is sometimes nicknamed a ‘Muslim Barbie’. Differences between them include lifestyle and appearance. Fulla’s activities mostly include shopping, spending time with her friends, cooking, reading, and praying. Barbie dolls come in a wide range of hobbies and careers. According to the brand manager at NewBoy, there will be a doctor and a teacher Fulla in the future, as “these are two respected careers for women that we would like to encourage small girls to follow.” Although they both have a wide range of clothes, furniture, jewelry, and other equipment, Fulla’s outdoor clothes do not include swimwear or anything similarly revealing. Skirts are longer than knee-length, and Fulla’s shoulders are always covered. Compared to Barbie’s curves, thin legs, and large breasts, Fulla has a smaller chest, is thinner, and may be younger than Barbie. While the standard Barbie has blond hair, blue eyes, and fair skin, the standard Fulla has dark hair, brown eyes, and olive skin. Despite this, they are both criticized “for presenting the same unrealistic idea of beauty… a certain image for women to conform to. ” Fulla was actually once described to be the physical antithesis of Mattel’s Barbie. Fulla was designed to promote Muslim values and be a role model for Muslim girls worldwide, whereas Barbie is targeted to Americans. Fulla has no male companion whereas Barbie has Ken.

Fulla is sold with a line of accessories, including umbrellas, watches, bicycles, corn flakes, cameras, CD players, inflatable chairs, and swimming pools. She was designed to be unlike Barbie and to be the traditional Muslim woman whose life revolves around home and family. Some Muslim parents have claimed that if girls dress their dolls in headscarves, they will be more encouraged to wear a hijab themselves. Fulla has been praised as giving girls a Muslim role model.

In many of the countries in which the doll is sold, Fulla is relatively expensive at about $10 for the standard doll. Because of this, NewBoy created a cheaper version of the doll called Fulla Style.

This entry was posted in People, Social Commentry. Bookmark the permalink.