There was a very interesting article on the captioned subject matter in Financial Express of  14th JULY 2011. Here is the link to the article :

In response to the above article, I had posted some comments on FE’s website.My comments are now seen live just below the article which can be read by clicking on the above link. 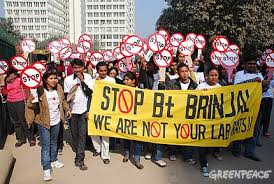 Here is what is displayed on FE’s website :
Comments
» Bt Brinjal Posted by J S BROCA on 2011-07-19 07:48:28.618682+05:30
Dear Sir, This refers to the column titled :”Future of Bt Brinjal” by Robert Wager in FE of 14th July 2011,higlighting the pros and cons of this controversial issue.Some researchers claim that Bt Brinjal is safe for human consumption.Others warn against its toxicity.While some vouch that our farmers will harvest more profits from its cultivation,as it happened in case of Bt cotton,others and especially the eNGOs,have sounded a note of caution on Bt related foods.The proof of the pudding lies in eating,it is said.To prove that Bt Brinjal is indeed safe for humans,let all concerned ministeries make and serve various dishes made from Bt Brinjal at all official lunches,dinners and meetings and at all marriages of their kith and kin and then publish the results to show that Bt Brinjal is indeed safe.Practise before you preach.Then,let ads of Bt Brinjal Brand Ambassadors loudly proclaim:” Look Ma,no side effects of Bt Brinjal !” If need be,make it mandatory to serve Bt Baigan Ka Bhartha,Bt Baigan Ki Subzi,Bt Baigan Ki Cutlets and Bt Baigan Ki Soup at all cultural meets of foreign visitors to India.Parliament House Canteen can also include such dishes in its menu.Sanjeev Kapoor of Khaana Khazana fame and of Food Food TV Channel can be roped in to promote Bt Brinjal.Innovations in food products need innovative marketting techniques.After all,it is a question of to Bt or not to Bt.
J S BROCA
NEW DELHI
——————————————————————————————–
YOUR RESPONSES WOULD BE WELCOMED.
Enjoy your Brinjal dishes,until Bt Brinjal matter is finalized.

Having posted the above piece yesterday ie 19th July 2011,to my surprise,a highly edited version of my letter has been published in today’s (20th July 2011) FE containing words that I did not write.They have chopped out the humourous part and literally fed Bt Brinjal words into my mouth .See the letter for yourself and compare what is there on FE’s website and what is published in the letters to the editor column today ! Thats Creative Journalism for you ! Ha ! Ha!
Letters to the editor
The Financial Express
Wednesday, Jul 20, 2011
: To Bt or not to Bt …  Apropos of the column “Future of Bt brinjal” (FE, July 14) by Robert Wager highlighting the pros and cons of this controversial issue, some researchers claim that Bt brinjal is safe for human consumption, while others warn against its toxicity. While some vouch that our farmers will harvest more profits from its cultivation, as happened in the case of Bt cotton, others, especially the eNGOs, have sounded a note of caution on Bt-related foods. It must be mentioned that, although science is clearly on the side of commercialisation of Bt brinjal, the politics of GM crops in India is anything but clear. When we all know, and science has proved, that reduced pesticide sprays, increased yields and healthier food are all well documented outcomes from Bt crop technology, what’s making the government not act is difficult to understand. For the government, it seems, it is still a question of to Bt or not to Bt.
JS Broca ,New Delhi
This entry was posted in Comments to print media, Humour, Nature. Bookmark the permalink.

3 Responses to Future of Bt brinjal…