In a recent issue of SCREEN,there was an article on this famous on-screen pair of yester-years. 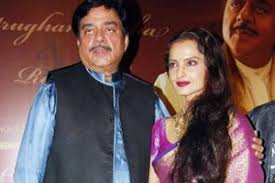 Here is what I wrote to the Editor of Screen,in my letter in response to the above piece: Dear Editor, This refers to the news item in Screen of 30th May 2011. “Hot Shotgun and Sultry Rekha to pair again after decades”- is a news item head line that will be loved by their Bollywood fans.Both have their own distinct styles,charisma and USPs.“Rampur Ka Lakshman” made in 1972 and directed by Manmohan Desai was a super hit mainly due to its melodious music by RD Burman.Its hero was Randhir Kapoor.Shotgun had essayed the role of his estranged brother and a criminal gang leader with elan and his unique stylized acting.“Jaani Dushman” another movie of 1979 had Rekha too with Shotgun but Reena Roy had a meatier role in it if I remember correctly.Later on,Reena and Shatru had made a nice pair in several other movies of those times.How Shatrughan became “Shotgun” is also another story by itself.His confidence has been his magic mantra.Further, being big-mouthed and a brash actor with an I-damn-care and cock-a-hoop attitude made him the darling of the masses and the front benchers in cinema halls.His style of dialogue delivery won him rave reviews.He has been successfully multi-tasking these days with his political career,his Bhojpuri avatar of KBC,keeping a watchful eye over his lovely daughter’s career since her sensational debut with Salman in “Dabangg” as well as his association with a few but meaningful films with character artiste’s roles.These myriad portrayals have kept him in the limelight and has worked wonders for him.“APJKTH” ( Aaj Phir….Hai) will be a movie to be watched for,eagerly by fans of both thse stunning actors.Rekha remains an enigma till date and this brash Bihari boy has certainly travelled far.All the best to both of them. J S BROCA,NEW DELHI

I am sure,there are many fans of this pair out there who will be waiting eagerly to see their chemistry after decades!!

This entry was posted in Movies & Entertainmaint, People. Bookmark the permalink.