M&A, for those who are not familiar with this abbreviation,stands for “Mergers & Acquisitions“.

As per one definition,the phrase mergers and acquisitions (abbreviated as M&A) refers to the aspect of corporate strategy, corporate finance and management dealing with the buying, selling and combining of different companies that can aid, finance, or help a growing company in a given industry grow rapidly without having to create another business entity.
As per another definition,Merger means the combining of two or more companies, generally by offering the stockholders of one company securities in the acquiring company in exchange for the surrender of their stock.
An acquisition is the purchase of one company by another company. Consolidation is when two companies combine together to form a new company altogether. An acquisition may be private or public, depending on whether the acquiree or merging company is or isn’t listed in public markets. An acquisition may be friendly or hostile.
Although often used synonymously, the terms merger and acquisition mean slightly different things.When one company takes over another and clearly establishes itself as the new owner, the purchase is called an acquisition.
From a legal point of view, the target company ceases to exist, the buyer “swallows” the business and the buyer’s stock continues to be traded.In the pure sense of the term, a merger happens when two firms agree to go forward as a single new company rather than remain separately owned and operated. This kind of action is more precisely referred to as a “merger of equals”. The firms are often of about the same size. Both companies’ stocks are surrendered and new company stock is issued in its place.
For example, in the 1999 merger of Glaxo Wellcome and SmithKline Beecham, both firms ceased to exist when they merged, and a new company,GlaxoSmithKline, was created.
In practice, however, actual mergers of equals don’t happen very often. Usually, one company will buy another and, as part of the deal’s terms, simply allow the acquired firm to proclaim that the action is a merger of equals, even if it is technically an acquisition. Being bought out often carries negative connotations; therefore, by describing the deal euphemistically as a merger, deal makers and top managers try to make the takeover more palatable. An example of this would be the takeover of Chrysler by Daimler Benz in 1999 which was widely referred to as a merger at that time.

Without splitting hairs further,I now come to the point I wished to comment about.The Competition Commission of India (CCI) on 11th May 2011 announced its mergers and acquisitions (M&A) regulations, letting Corporate India to carry out deals that can have little impact on competition without any hassle. There was an article titled :” CCI notifies M&A Norms” in Financial Express (my favourite business newspaper) dated 12th May 2011.To read the article directly on line,please go to the following link :

http://www.financialexpress.com/news/cci-notifies-m&a-norms/789139/0
On reading the article,this is what I wrote to the Editor,by way of a letter,as usual:

Yes,streamlining the norms,making M&A easier and removing hurdles and bottlenecks from the process are all good steps and in the right direction,but, Corporates still certainly need to heed the warning made by Warren Buffet, as long back as in 1930,when he had said this about M&A :”In some mergers,there truly are synergies-though often times the acquirer pays too much for them-but at other times,the cost and revenue benefits that are projected,prove illusory.Of one thing be certain: if a CEO is enthused about a particularly foolish acquisition, both his internal staff and his outside advisors will come up with whatever projections are needed to justify his stance. Only in fairy tales are emperors told that they are naked.” Words of wisdom,from the wizard of Omaha,indeed ! So,Corporates, beware before you tread  the M&A paths !!
J S BROCA
New Delhi.
——————————————————————————
My dear readers must be wondering about the last portion of Buffet’s quote about the naked emperor.Well well,to enable you to get the full grasp of the meaning of this I will take you to a site where you can read the fairy tale and decide for yourself what Buffet meant.There are quite a few sites on the net,but the one I reffered to and liked was available on the following link:

http://www.rickwalton.com/folktale/yellow04.htm
You may have read the story in your school days,but then reading it again will be a pleasure,I feel. So, go to the above link and refresh yourselves.

The story titled :”The Emperor’s New Clothes “,was originally written by Hans Christian Andersen,but it has been re-told by several other writers as well.

The basic plot of the story is as under :

An Emperor who cares for nothing but his appearance and attire hires two tailors who promise him the finest suit of clothes from a fabric invisible to anyone who is unfit for his position or “just hopelessly stupid”. The Emperor cannot see the cloth himself, but pretends that he can for fear of appearing unfit for his position or stupid; his ministers do the same. When the swindlers report that the suit is finished, they mime dressing him and the Emperor then marches in procession before his subjects, who play along with the pretense. Suddenly, a child in the crowd, too young to understand the desirability of keeping up the pretense, blurts out that the Emperor is wearing nothing at all and the cry is taken up by others. The Emperor cringes, suspecting the assertion is true, but holds himself up proudly and continues the procession. 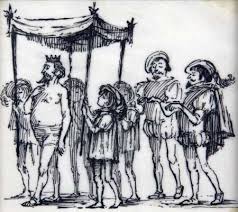 The important aspect is to understand the moral of this fairy tale.I have thought a lot about this fairy tale and the sense in it. Finally, I have come to the conclusion that there’s not only one moral, but several in it.

The most obvious one is that people should say what they think and should have their own opinion. It’s very important to have your own opinion, because if you don’t, you depend on other people. The people in the fairytale all see that the Emperor has got nothing on. But because of their fear to be considered stupid, they don’t speak up. Because no one says anything, the two swindlers can earn a lot of money without doing anything. But nevertheless it’s important to think about the thoughts that one tells aloud because it’s easy to hurt other people. Not every criticism or opinion is worth to be uttered. The difficult thing is to find a balance, to be honest and friendly.

In this fairytale, there is a “happy ending” and the Emperor is the only one who is deceived by the swindlers,but in fact, things can get much worse if one does just what the others do.

There is a second important aspect to look at. The Emperor pretends to be a very important man, but he does nothing but worry about his clothes. Nevertheless his people admire and adore him.

So the moral is that one shouldn’t believe in every authority or in everyone who thinks himself to be better than you. The emperor isn’t a better man because of his title or money or his fine clothes; he’s just a human being as anybody else.The important thing is to let other people think whatever they want and to not lose one ’s self-esteem.

In some way this moral is similar to the first one. Both of them want to tell us that it isn’t so important what other people think of one or themselves, but what we think of ourselves. If one is happy with oneself, it’s much easier to get on with other people.

Then there is the moral I like most:  “Preserve a bit of a child in your character!” Children are very direct, they tell straight out what they see. They don’t shut their mouths because they don’t want to hurt someone or because one could think “badly” of them. They just tell what they think. That’s a very important thing to do, to tell what one thinks, at least if it’s important.

But there is another aspect about children that is very interesting. They can pretend to be someone completely different from who they are but on the other hand they know when someone is pretending to be someone else or if he really is like that.

The little child in the story looks at the Emperor and screams out that he is naked. It doesn’t matter for the child if he’s the Emperor or not, he’s just a naked person. The adult people wouldn’t have dared to say anything not only because he’s the Emperor, but also because they are afraid of the consequences that these simple words could have.

So H. C. Anderson wants to tell us that we should keep this childlike spontaneity and say, at least from time to time, what we really think or see, and not what we are supposed to.

Interesting isn’t it ?
Your views/comments will be appreciated.Meanwhile,I shall wait to see if my letter is published or not.