This morning , while reading my early morning news paper,I came across an ad for “Technology Day” (11th May 2011) issued by Ministry for Science and Technolgy.I was happy to see the name of Ms Chhavi Rajawat,Sarpanch,Village Soda,Dist.Tonk,Rajasthan, as one of the key speakers in the symposium.

Why this sudden fascination with Chhavi, you will be tempted to ask. Well, when I first read and heard about her ,I had posted a long piece on her in another prestegeous forum,on 5th April 2011,under the title of “Persona Grata:Mover & Shaker”. Here is the link to the posting for those interested to read it direct on the website of the forum :

Today, almost after a month and a week ,I am posting the same piece for a more larger readership,herebelow :

PERSONA GRATA: Mover and Shaker by

Since, after my retirement in 2009, I have been involved as a Visiting/Guest Faculty in a number of colleges/institutions in New Delhi,teaching various subjects to MBA, BBA and PGDBM students, whenever I see, hear or read anything related to educational field, my antennas perk up !

Here is what impressed me when I read in the media, a few days ago about a girl.

She wears kurtis and jeans.No harm with that,though some of our societal moral police force in some parts of our country have strongly voiced their views saying that girls should not wear jeans.I will not enter into a debate here.

She looks like a model,or may be an upcoming Bollywood starlet.Again no harm in being good looking and well endowed by nature.Its God’s gift I suppose.

She is an MBA.So what of it ? With a mushroomed growth of educational institutions in every lane of a town/city,MBAs are mass produced and are out in lacs every year.

She is computer savvy.Well,in today’s environment,it is necessary to have at least basic knowledge of computers. Computer classes are minting money these days with easy and affordable packages.So,being savvy is an added advantage.

She is our country’s youngest and only MBA sarpanch of a remote village in Rajasthan. Am I joking or what,you will be inclined to say.No, I am serious.

Meet Chhavi Rajawat.She recently addressed the 11th Info- Poverty World Conference at the United Nations and won appreciation for her work and mission.

This 30- year- old girl gave up a senior management position (earning around Rs.50,000/- a month) with Bharti Tele-ventures (part of the Airtel group) to serve her beloved villagers at Soda, 60km from Jaipur, in Tonk District, in backward Rajasthan. The village is home reportedly to around 7000 people, mostly farmers.Soda has been officially declared as a most backward area by the Government.

Chhavi has set a perfect example for the oft repeated quote thse days- ‘think global, act local’.This MBA degree holder, who has till recently seen the inside of the corporate world, is now going around with illiterate or semi-literate villagers.

She simply gave up her plum job,left the shackles of her hitherto urban lifestyle, and decided to serve the underprivileged inhabitants of her ancestral village,Soda,after the people, who fondly refer to her as ‘Baisa’, elected her as their Sarpanch (village head) sometime in February, 2010. This is what she said on her elevation to the new post : “The villagers breached their caste, gender and religious barriers to guarantee my win.I belong to Soda and they need me”.

That is not all.Hear this : “I am a village girl,but thankfully, I have had an opportunity to learn in some of the best educational institutions.I came back to my village to work for them. I owe to this village, where I grew”.

What inspiring words from the mouth of this village girl !They are very relevant in view of the fact that still many village people  do not feel the need for educating the girl child.

By the way,she studied at the Rishi Valley School in Bangalore, Lady Shriram College in Delhi and had topped her MBA class in the Indian Institute of Modern Management, Pune. If I talk in the language of our elders,I would say-”Beti, tum nein apney khaandan aur gaon ka naam roshan kar diya !” (dear,you have made your family and your village, proud of you)

Every MBA knows about what is called the vision and mission statement of a corporate entity.Now let us see her vision and mission.She has laid down her priorities very clearly.She has a master plan well chalked out with priorities like drinking water,sanitation, forestation, better education,providing electricity to every household, roads, self- employment especially for women, adult education and vocational training especially for the youth.In short,her efforts will be to ensure a self reliant and self sufficient village.

Great intentions and motives.However,as is usual,such projects need money.Lack of sufficient funds is a hindrance.So,to support her project, she devotes some of her time at the family-run Hotel Kailrugji in Jaipur and is very hopeful of mobilizing the funds that she needs.

The people of Soda have expressed their confidence in their new sarpanch’s capabilities. According to reports and feedback from the villagers, in the past six months,the standard of living of the people has significantly improved.She goes around to every village school and converses with the village children in English,encouraging them to continue their studies.In fact,the villagers have opined that:” Baisa is much better than the MLA of this constituency”.

Yes,motivating others,persevering for others,working for the neglected sectors of the society-are all acts which if done earnestly,give a lot of mental satisfaction to the doer !

What about her own desires,her passions,her hobbies-you will ask me,for,at this young age,how can you expect such self less service from her? This is what she says : ”I do not miss my city life.I have a lot of passions –watching movies, reading books and listening to music, to name a few,but nowadays,I have no time for all that. There is so much to be done and getting work done is not easy.”

So,according to me,Chhavi is a real mover and shaker literally. She has moved from a city life full of allurements to a simple village life.She has moved from air conditioned chambers of corporate offices to the thatched roofs of her village.She has moved from her plum job in the cities to her mission in the rural area of her native village.She has shaken the myth that village girls are meant to get married and look after the chulha-chowka of her in-laws and her pati-parmeshwar ! She has shaken the rural people and has sought their co-operation in turning around their lives for the better. My salaams to this mover and shaker of the next-gen !

There were many lovely responses to this posting. I shall post some of them later in a follow-up piece on this persona grata.Till then see some of her photographs : 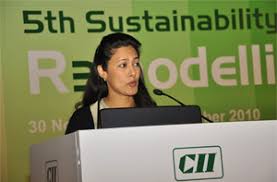 Your valuable responses would be welcome on this MBA Girl with Leadership Skills.

This entry was posted in Ideas, People, Social Commentry. Bookmark the permalink.