God has a sense of humour !

God has a sense of humour !

I often wonder.Does the Master of the Universe,up there,have a sense of humour? I asked some of my students this question,last week.You will be astonished to know about the variety of responses that I got.

Another keen observer,about the things around us,came out with a hilarious example of God’s sense of humour.”Sir,I would like to invite your attention to a few species of animals.Look at their physical features.The ostrich for example.Tall,long neck,small head,beady eyes.It is distinctive in its appearance and has the ability to run at maximum speeds of around 100 kilometres per hour,the top land speed of any bird.It is a bird,but it cannot fly.Wow ! God must have designed it in one of his rare moments of imagination,I feel.” How’s that ?

Continuing in the same vein,he next said : “Take the case of another animal-the hippopotamus,Sir.It has a physical resemblance to a pig.The hippo is recognizable by its barrel-shaped torso, enormous mouth and teeth, nearly hairless body, stubby legs and tremendous size ! It often reminds me of a pygmy sized sumo wrestler ! I understand that despite its stocky shape and short legs, it can easily outrun a human being.Hippos have been clocked to run at 30 kilometres per hour over short distances.Doesn’t the animal look so funny ? Hence I am of the firm opinion that yes,God indeed has a sense of humour !” Can you argue against the student’s case ? I think not. 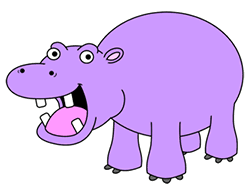 Another student,perhaps a keen watcher of the Natural Gegraphic TV Channel,added : “Sir,another example is the the duck-billed platypus. An odd anmal, you see.It is the only mammal that lays eggs instead of giving birth to live young ones.Funny,don’t you agree ?” I nodded in agreement !

Well,I next changed the topic a little bit. I threw a googly :”Tell me,if indeed God has made man in his own image and we have just accepted that God has a sense of humour,then why is it so that some people are humourless ?” There was total silence in the class for a few moments.The students seemed stumped for an answer.Finally,a last bencher raised his hand to answer my so called “out of the syllabus”question sort of.“Well,Sir,those who are humourless may have been absent when humour was being handed out.Or,perhaps,God might have run out of stock.The more the demand,the less the supply,the lesser the allocation of scarce resources.Simple economics,Sir !” Can you beat that ? No,certainly not !

To make the moment a bit lighter,I said:”If you all agree,let us pray to God to grant some quota of humour to these humourless people, when he has a fresh and abundant stock next time !” They smiled.I smiled too.

Taking the discussion further,I ventured to comment that we normal human beings often pictured God as a serious and sad looking old man,over burdened with the incredible and arduous task of managing this huge, vast, complex universe of ours and providing adequate livelihood for all his creatures.To this a pretty young thing in the class said :”Sir,God is neither old nor young. It is the passing of time that makes one young and then old. God exists outside the frame of time. God exists in eternity.Further,I believe that God is not a serious person, at least in the sense of being burdened with a task that is too gigantic for him. Is it more difficult to manage the universe than to create it out of nothing? And most of all God is not sad. God is perfectly and eternally happy, and enjoys a divine sense of humour. The sense of humour we have, if we have one, is but an imperfect participation in God‘s sense of humour.” A thunderous applause in our class followed this argument.

I next posed a question to the class : “So what exactly is humorous? ” A serious looking boy sitting on the first bench,got up and made an attempt to answer it.” Humorous is that which is unexpected, incongruous and preposterous.Sir, when we go to see a circus, for example, it is the incongruity of the clown with his baggy pants,bulbous nose,his long shoes, and painted face,that is humorous. When we go to see a comedy movie say,we laugh at the funny actors since they always do the unexpected, the incongruous and the preposterous. That makes us laugh and forget our tensions.Well that is exactly what humourous is !” I made a thumbs up sign at the boy.He smiled and sat down satisfied with my response.

To conclude,then,a sense of humour is simply a sense of truth, a sense of reality that enables us to discern the untrue, the unreal, the incongruous and the preposterous. So,friends,God has a perfect sense of humour.Moreover,God is All Truth and is the “really real,” the source of all reality.

Before,I sign off, here is a small dose of God’s humour.If you have heard of it before,then too,you can enjoy it and laugh at it once more.OK?

God was in the process of creating the universe. And he was explaining to his subordinates “Look everything should be in balance.For example, after every 10 deer there should be a lion. Look here my fellow angels, here is the country of the United States. I have blessed them with prosperity and money.But at the same time I have given them insecurity and tension….And here is Africa. I have given them beautiful nature. But at the same time, I have given them climatic extremes.And here is South America. I have given them lots of forests.But at the same time, I have given them lesser land so that they would have to cut off the forests… So you see fellows, everything should be in balance.”
One of the angels asked…”God, what is this extremely beautiful country here?” God said……. “Ahah…that is the crown piece of all. “INDIA”,my most precious creation. It has understanding and friendly people.Sparkling streams and serene mountains. A culture which speaks of the great tradition that they live.Technologically brilliant and with hearts of gold….. The angel was quite surprised: “But God you said everything should be in balance.” God replied — ” Yes,look at the neighbours I gave them.”

Now, do you not seriously believe that,God,does have a sense of humour ? I hope you do ! Thank God !

7 Responses to God has a sense of humour !