When newspapers and TV Channels were agog about the turbulence created by this so called modern Gandhi,there were some articles which aired a different view on the subject matter.One such piece was titled : “Why waste time with Hazare?” in Financial Express of 09.04.2011. To read the article,please go to the following link:

On reading this piece,here is what I wrote in response by way of a letter to the editor on 9th April itself :

With Anna Hazare and his “Gandhian ways” filling up millions of column meters in the media and all TV channels grabbing billions of eye balls and several thousand feet rushing to Jantar Mantar, it was refreshing to read a divergent view on this matter by this author.The title it self is enough to attract attention and get huge responses from readers.

In a way,Raj is right.Let us not remain focussed with corruption in smaller measures like getting a ration card, a driving license, an insurance claim etc,where, just by ‘systematically’ greasing the dry palms of concerned babus can get work done in a jiffy,where as straight forward and honest people stand endlessly in long queues without being sure if they will get served if they only stand and wait.(With apologies to Milton where the last line of his famous sonnet :”On his blindness” ends with this homily-They also serve who only stand and wait ! )

Yes,as suggested rightly by Raj,we need to take up cudgels with the authorities that be, for bigger and messier matters that can rock the presently steadily moving economy of our nation. From ” The Gods Of Smaller Things” ( again with apologies to Arundhati Roy) we need to become ‘Messiahs of Messier and Bigger Things’ like 2G Scam,Satyam Saga,CWG Scandals,CITI Bank Fraud and others like black money in Swiss Banks,ill gotten wealth of big fishes parked in tax havens abroad,etc,since as rightly concluded by Rishi,”tackling sophisticated economic corruption is also important because it threatens to derail the pace of the economic reforms and make us all look like a bunch of crony capitalists”. Jai  Ho Anna Hazare ! You have shaken up the nation with your “fast” for slow pace of acts and laws in this country !

I have waited till today ie 16th April ( 1 week to be exact) to see my letter published in Letters to the Editor column of FE,but so far it hasn’t seen the light of the day ! More on this subject later…Keep watching this blog and this post !! 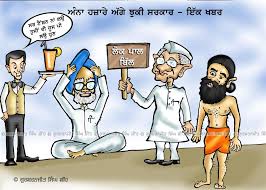 Finally,my letter made it in FE of 20th April 2011.Here is the abridged version of my letter :

MY LETTER IN F.E.

Letters to the editor

Apropos of the column ‘Why waste time with Hazare?’ (FE, April 9), with Anna Hazare and his “Gandhian ways” filling up millions of column metres in the media, TV channels grabbing billions of eye balls and several thousand feet rushing to Jantar Mantar, it was refreshing to read a divergent view on this matter by Rishi Raj. The title itself is enough to attract attention. In a way, the author is right. Let us not just think about corruption in petty issues like getting a ration card, a driving licence, an insurance claim, etc, where just by “systematically” greasing the palms of concerned babus the work can be done in a jiffy. Rather let’s take up cudgels with the authorities that be, for bigger and messier matters that can rock the steadily moving economy of India.

This entry was posted in Comments to print media, People, Social Commentry. Bookmark the permalink.

3 Responses to On Anna Hazare..