Moving with the times….

Moving with the times.

These are the days of social networking.Social sites like Facebook,Orkut etc have created historic records by connecting people across the globe.About two decades ago,the Ration Card was an official document that proved your existence.About a decade ago,Mobile Telephony revolutionised our lives.If you did not have a mobile phone,you simply did not exist.Today it has become as important as the air we breathe and the water we drink for survival.”Roti,Kapda aur Makaan”which was the early triology necessary for our basic needs has now become :”Roti,Kapda,Makaan and Connectivity “.
Since around last two years or so various Social Networking sites have given us yet another important tool for connecting with our family,friends,colleagues and well wishers.Perhaps after China and India,the next highest population is that of Facebook.
Today,if you don’t have a page or profile on FB,you are treated as if you are an outcaste or from some other planet of morons.These days,my day begins with FB and ends with FB.
I was astonished to read about a person who sells chaat (a popular road side Indian snack) in a hand cart.He somehow came to know about FB and other modern tools and means of connectivity.
What better way could be there to connect with his chaat customers,he often thought.Finally,he had a brain wave.He named his hand cart as ” FACEBOOK CHAATWALA “.
Obviously,he wanted to encash the Brand Equity of FB.Further, more, he has named his different offerings as :” ORKUT Sev-puri “, ” TWITTER Paani Poori “, ” SKYPE Bhel ” , ” BBM Tikki Chaat”, ” G-Talk Dahi Bhalla “.
Enterprising and innovative isn’t it ? Yes the humble chaatwaala has moved with the times.
To view the photograph of the FACEBOOK CHAATWALLA,go to Google Images and search for :”facebook chatwala” and within 0.36 seconds or even less,you will get the images.Enlarge one image and enjoy the road show.
I would have given you the link to one of such enlarged images to save you the bother but I discovered that the link was just too long ! It is atrouble-some task to copy and paste it.So you too try to search it using  Google Images as suggested above.
The idea is quite mouth watering !
Happy viewing ! Jai Ho ! FB Chaatwaaley ki !
BTW , sometimes the image may not  be  seen because of  copyright issues. 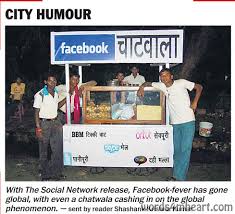 This entry was posted in Current Affairs, Humour, Ideas, People. Bookmark the permalink.

7 Responses to Moving with the times….