One of my most favourite Bollywood numbers,is the song from the film titled “Prince” sung by late Md. Rafi (alongwith Shammi Kapoor?)
Prince was a 1969 Hindi movie produced by F. C. Mehra and had been directed by Lekh Tandon. The film starred Shammi Kapoor, Vyjayanthimala, Rajendranath, Ajit, Helen, Leela Chitnis and Asit Sen. The film’s music was by Shankar Jaikishan. The film became a box office hit.
Here are the lyrics of this song as remembered by me from my college days (I was studying in BE II of M S University Baroda then !) as heard on a Standard Record in those times.The LP version had an extra verse,if I remember correctly.

As mentioned earlier somewhere,I had the hobby of translating hit songs from Hindi films into English and singing them in college and hostel functions, keeping the original tune of the Hindi song in tact.
I was by God’s grace,always a hit and in a lot of demand on such occasions.I have a few black and white photographs of that era with me till today ! Nostalgic….stuff !

Here is my own translation (now almost learnt by heart !) for you to croon and enjoy….

When ever I am not there
Then Oh sweety pie,
Whom will you look at
And then feel shy,
You will never ever see the mirror again,
Without me,you’ll
Crave and cry…
Winding the stars….

It was at the climax
Of my love for you
That in ecstacy,
I thought-God was you.
Let this world
Keep judging for itself,
Whether it was good
Or-bad,mind you….
Winding the stars……

This song continues to mesmerise me even today after more than   4   decades….
Enjoy the song… Youtube link :
http://www.youtube.com/watch?v=qHaqhXekAh0
I hope you loved listening to it as much as I loved talking and posting about it.
Yes,I must have seen the movie over half a dozen times I think.Here is the star cast as I remember :
Cast:
Shammi Kapoor as Prince Shamsher Singh,Vyjayanthimala as Princess Amrita,Rajendra Nath as Vilayatiram,Ajit as Ratna’s Brother,Helen as Sophia,Leela Chitnis as Mrs. Shanti Singh,Parveen Choudhary as Ratna, Sudhir as Sajjan Singh,Sunder as Zoravar,Rashid Khan Zorawar Singh,D.K. Sapru as The King of Jamnapur,Ulhas as The King of Ramnagar,Leela Mishra as Kamla,David Abraham as Diwan Randhir as Michael. Another highlight of the film was a song :”Muqabla Hum Sey Naan Karo..” which was a scintillating dance competition between Vyjayantimala and Helen…see it on Youtube…link:

Helen has been the supreme dance girl of Indian cinema.To know more about this great dancing star,go to : 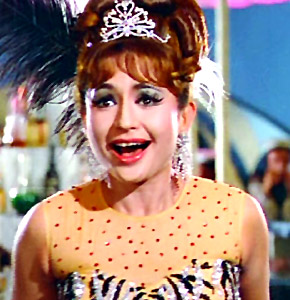 This entry was posted in Movies & Entertainmaint, Nostalgia, Poetry in Golden Oldies. Bookmark the permalink.