This article appeared on the website of my favorite magazine SCREEN recently:

Actors Shekhar Suman and Renuka Sahane are among the 12 celebrity contestants of the “JHALAK DIKHLA JA – 4“ which will see former Bollywood diva Madhuri Dixit making a comeback on TV as a judge.

The show, to be hosted by Mona Singh and Sumeet Raghavan, will also have television stars like Ragini Khanna, Ankita Lokhande, Sushant Singh Rajput, and Mahie Vij are participating in it along with Comedy Circus star Krushna Abhishek, Arjuna awardee pugilist Akhil Kumar, singer Anushka Manchanda, Indian idol contestant Meiyang Chang, besides item girl Yana Gupta. The show goes on air from December 13 on Sony TV.  The channel has decided to keep the identity of the 12th contestant as a surprise, that will be unveiled when the show goes on air next week, Sony officials said at a press conference in Mumbai on Tuesday night. “They were persuading me for two years. Finally, they took me to Los Angeles to see the American format of the ‘Dancing with Stars’ show,” Madhuri said. “The show was impressive and that is when the Sony officials said they were planning to replicate the same in India. That is when I decided that it was the right time to come in. Besides, dance is close to my heart,” she added. Madhuri said her preparations as a judge included understanding the different dance formats and styles. “I would be judging the personality of the contestants, their comfort level and their expressions and what they bring on stage,” she added.

Madhuri said she was in India just for the show and has no plans to do movies. “But you never know what future has in store for me,” she added.

On reading the above, this is the comment I posted on the website and the same is now displayed there just below the article:

It was good to see the dhak dhak girl Madhuri Dixit Nene back in the premiere to the show JDJ-Season-4.She still has the million dollar smile and the star qualities even after becoming a mum of two kids. Doctor Nene seems to have all the luck in the world. I suggest the dhak dhak girl to bring in her Doctor pati as her dance partner in a surprise item in an episode in near future to bring in TRPs. It will be good to know if the good doctor can also dance to the tunes of his better half.Wishing Madhuri a scintillating show. All the Best.

Those who wish to see the page directly can use this  link:

As a reward for those who have read this posting, here is a bonus:

Here are the links to Youtube videos of my favorite songs picturised on Madhuri Dixit :

Finally, here is a lovely photograph of Madhuri Dixit and family: 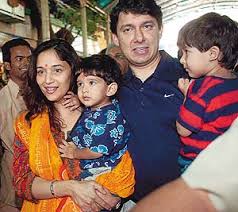 Before I buzz off, here is a 1000 watt smile from this dhak dhak girl

This entry was posted in Comments to print media, Movies & Entertainmaint, People. Bookmark the permalink.