Shah Rukh Khan on the moon…

MUMBAI: Bollywood has finally made it to the moon. It is making its presence felt 4 lakh km away on the lunar surface in an area close to where the first men on the men, Neil Armstrong and Buzz Aldrin, landed on July 20, 1969.

The International Lunar Geographic Society, a New York-based organization devoted to the study of the moon, has declared that a lunar crater in the moon’s Sea of Tranquillity has been christened after Shah Rukh Khan. This has been approved by the International Astronomical Union, which has a final say with regard to the naming of craters on the moon. The crater has been given the honorary designation as the Crater S R Khan on the occasion of Mr Khan’s 44th birthday” on November 2, 2009, the society said.

According to the society, the crater was named following a deluge of petitions from Shah Rukh’s admirers from India and around the world. Incidentally, one of his dedicated admirers has already presented him with a piece of the moon by buying him land there.

The decision has triggered a mixed response within the scientific community, with the father of the Indian moon mission Krishnaswamy Kasturirangan supporting it, but president of the National Space Society, Suresh Naik, describing it as “shocking”. In another vein, a young schoolgirl commented, “I think another crater on the moon should be named after Amitabh Bachchan, since he is also a great actor.”

Secretary of the Indian chapter of the Moon Society, Pradeep Mohandas, shared Kasturirangan’s view. “I think it is not a bad idea since it reflects the thinking of the new generation of young Indians,” he said.

Kasturirangan told TOI on Sunday from New Delhi that Shah Rukh is extremely popular and a symbol of national pride.

“I do see a rationale behind this decision. He is a kind of ambassador for India and this reflects the way India views him,” he said.

Shah Rukh’s link with the space programme goes back to May 2001, when the last man who stood on the surface of the moon, Eugene A Cernan, during a visit to Mumbai invited the actor to Nasa’s Johnson Space Centre in Houston, Texas. The actor sat in a model of the lunar vehicle which was brought over by Cernan. Shah Rukh acted in `Swades’, the bulk of which was shot in Nasa’s Kennedy Space Centre in Florida.

The S R Khan Crater is part of the Arago crater group, named for Francois Jean Dominique Arago, a Catalan-French mathematician, physicist, astronomer and politician who lived from 1786 to 1853. It is the largest of the main Arago crater’s four satellite craters and rests in the Sea of Tranquillity, directly south of the main crater.

Actor Shah Rukh Khan isn’t only reigning the Earth. He seems to have made a place for himself on the moon as well, what with a Lunar crater being named after him. The International Lunar Geographic Society recently announced that a crater in the ‘Sea of Tranquility’ will be named after Bollywood star, Shah Rukh Khan.

“It’s absolutely thrilling and humbling at the same time,” said an elated Shah Rukh Khan about the honour.

The actor, who has reigned Bollywood since the last twenty years, says that this honour is more for India, and that he is glad that India makes its presence on the global map once again! “I am in a small way doing good service for my country. The fact that my name is chosen is because the world is looking at India and I happen to be a part of this wonderful land of opportunity,” he said.

It was decided and the society and the International Astronomical Union that the crater on the moon will be called Crater S R Khan, and the same was decided upon on SRK’s 44th birthday. While both SRK and his fans are thrilled by this decision, some experts and scientists haven’t taken too kindly to his honour being bestowed upon an actor. Some feel that the honour should in fact have been bestowed upon a scientist, or an expert in the field.

However, unperturbed by negative responses, SRK is on top of the world, literally speaking. “I came to Mumbai with stars in my eyes and Allah has granted me all and more. I am so happy that through the opportunity given to me by my fans, audience and the media platforms that I work with… So thanks to all those who suggested my name and to everyone who has made films with me. My kids are very excited and I know my parents would have been very proud. I’m already telling Karan to launch the next film called My Name Is Chand.”

Mumbai. Various married men, apart from Aamir Khan fans, have been hurt by the news of a crater on moon being named as “Shah Rukh Khan”. These men, under the aegis of Jealous Husbands Association (JHA), have written a letter to The International Astronomical Union to overturn the decision. JHA members fear that their wives will stop thinking about them on Karwa Chauth if the moon had SRK on its surface.
“This SRK bloke is making things difficult for me with each passing day. Each day my wife would like me to do some silly stuff he does on the screen and make me feel like a second man in her life. Karwa Chauth was one day when I felt so great. But now, she’d actually be looking at SRK first (in the moon) even on that day. This sucks!” Rahul Raj, a disturbed husband said.

Many husbands fear that their wives might keep on looking at the moon if a crater was named Shahrukh Khan over there.
Rahul was asked by his wife Anushka to take dance classes last year after they went to watch Rab Ne Bana Di Jodi, and his hatred for SRK had been growing ever since. He joined various online hate groups against SRK, but was disappointed to find them spammed with Aamir Khan’s supporters. Rahul finally discovered JHA and applied for its membership.
“I came to know that I was not alone. There were thousands of men, married and unmarried, who were simply pissed off with this guy’s ways. Our girlfriends and wives swooned on the antics that irritated us to the core.” said Rahul, who still can’t understand why his wife Anushka smiles even today while watching Kuchh Kuchh Hota Hai.
While JHA is appealing on emotional grounds, Aamir Khan fans have pointed out that the naming of an astronomical body after a human being was not a great deal, and media was reporting the development without checking the facts.
“I checked the website of International Astronomical Union. They clearly mention that people can buy names of stars and other bodies in the solar system. Clearly some SRK fan spent some money and bought the name, and now it’s being made as if it was a matter of pride and recognition for India. Bullshit! This has made us look like a nation of idiots instead.” Roshan, a die-hard Aamir Khan fan, revealed.
Roshan has appealed to the crazy wealthy fans of Aamir Khan to buy a star in his name and get even with SRK.
————————————————–
This whole issue tickled me pink. Here is my view point in verse form :
Shah Rukh Khan on the moon
Shah Rukh Khan,Shah Rukh Khan
You now have a boon.
A crater in your own name,
On our pretty moon !
Shah Rukh Khan, Shah Rukh Khan
Now make your life,
Get another crater named
After your dear wife !
Shah Rukh Khan, Shah Rukh Khan
A suggestion here to consider-
After 25 years auction them
To the very highest bidder !
Make hay while the sun shines
It is very often said,
Make your bucks dear
Till your moon doesn’t set !
The world is full of people
Of every crazy kind
Shelling out mega bucks
They wouldn’t ever mind.
So till your figure and face
Are really fit and fine,
Make your fortune dear,
For the period of decline !
————————————————
I am reminded of pot-holes on roads in Bihar. It was jokingly said that there one couldn’t judge whether there were pot-holes on the road or there was a road on the pot-holes.Lallu Yadav,the then CM had grandly announced : ” We will soon make all our roads as smooth as Hema Malini’s cheeks !” Alas ! That never happened !
We should feel proud if our city fathers even name a few pot-holes on our city roads after me or you ! There were quite a few cartoons on this subject in the media.Here is one selected at random :

SRK on the MOON! 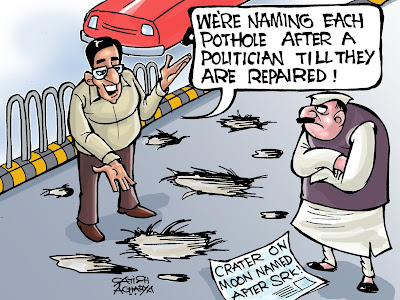 A crater on the Moon is named after Bollywood King Shah Rukh Khan, which turned out to be a big scam!
Satish Acharya.
This entry was posted in Comments to print media, Humour, Social Commentry. Bookmark the permalink.

29 Responses to Shah Rukh Khan on the moon…