Since it is Baisakhi time once again, I become nostalgic and go back to one of my most favourite Bhangra Songs titled ” Main Koyi Jhoot Boliya? ” (” Did I tell a Lie ?”) .

It is from Raj Kapoor’s famous movie titled “Jaagte Raho” of 1956. The song is in Punjabi.The wordings,followed by my own literal translation, go thus :

The world unjustifiedly / falsely shouts (makes a noise)
About wrong-doings all over the world.
Just ask your own self.
Who is not a thief ?
( We are all thieves– involved in many wrong-doings)

People have become rich
By depriving others of their rights.
I call it downright thievery,
But people call it merely luck !

I have seen big Pandits,
Who are very learned and do a lot of meditation
But (curiously enough,they are mired in contoversies)
They are known to misuse donation funds
Received in the name of Gau shaalas
(cow-sheds set up for charitable purposes
for looking after welfare of stray cattle)

We have seen people who are truthful
Being hanged to death !
And the cheaters / liers enjoying their lives.
People call it God’s ” maaya “,
I call it gross injustice !!

Oohoon aahoon oohoon aahoon ………….
——————-
The song depicts some of the earliest scenes of the new (post-Partition) “bhangra,” with the original Patiala/Sunam group. The film by Raj Kapoor is actually set in Bengal.

The wordings of the song are harsh truths and grim realities even in the present times !!

I just love this song and on popular requests have sung it umpteen times in school,in college and in social functions and in sangeet mehfils in marriages, much to the delight and appreciation of all.The song is so peppy that all listeners are spell bound and voluntarily participate in it by clapping their hands to the beat and joining the chorus !!

Those who would like to watch it and hear it on Youtube,please click on or go to the following link:

NOTE: Downloding the song takes time and gets downloaded in stages.Once downloading is completed,press the replay button and then listen to the full song without a break.HAPPY BAISAKHI !!

Some rare and very useful information about the movie, “Jaagtey Raho”,
is available by going to the following link :

There is also a rare poster of this movie displayed on the site :

The film centers on the trials of a poor villager (Kapoor) who comes to a city in search of a better life. However, the naive man soon becomes trapped in a web of middle-class greed and corruption. The film also features a cameo by Nargis in the final scene.

A poor peasant (Kapoor) from the village, who comes to the city in search of work, is looking for some water to quench his thirst. He unwittingly enters an apartment building, whose residents take him for a thief and chase him. He runs from one flat to the other trying to escape his predicament. Along the way, he witnesses many shady undertakings in the flats where he hides. Ironically, these crimes are being committed by the so called “respectable” citizens of the city, who by day, lead a life totally in contrast to their nighttime deeds behind closed doors.He is shocked by these events, and tries to escape by evading the search parties, that are patrolling the apartment building in search of the elusive thief. He is unfortunately seen, and people chase him to the roof of the building. He puts up a brave resistance, and then descends by the water pipes onto the porch of a flat. He goes in to find a young girl (Daisy Irani). She talks to him and kindles a self belief in the peasant, who determinedly tries to face the adversity waiting outside. But when he ventures out of the flat, he is surprised to find that nobody takes notice of him. He eventually leaves the apartment building, his thirst still unquenched. He hears a beautiful song and searching for its source arrives at the doorstep of a woman (Nargis) drawing water from a well. His thirst is finally assuaged.

Other than the acting, the music is the highlight of the film. Lyrics are by Shailendra and Prem Dhawan and music is by Salil Choudhary. The songs Zindagi Khwaab Hai, Main Koi Jhoot Boleya and Jaago Mohan Pyaare are still remembered by people as classics.

Cast :Raj Kapoor
Nargis (guest appearance)
Motilal
Pradip Kumar
Sumitra Devi
Sulochana Chatterjee
Smriti Biswas
Daisy Irani
Awards :A shortened version of the film won the Grand Prix at the Karlovy Vary International Film Festival in Czechoslovakia in 1957.
There is also another famous and rare poster of the film depicting the final scene where Nargis helps Raj in quenching his thirst at last !

————-
For those interested in some more details, please read the following paras gleaned from some other sources from the internet : 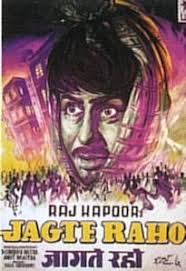 JAGTE RAHO is a poetic film from India that features the city as an allegory for the good and evil that is present in the world. Mohan is a humble villager who arrives in the big city and through his travels during his first night he is witness to the dark side of humanity, as well as being pursued as a suspected thief. When the dark night ends, he finds that when day comes, all is beautiful again, and the cycle continues.Jagte Raho, set over a single night’s events is a brilliant comic yet critical survey of Bengali middle class life. The film is written and directed by legendary Bengali actor-director Sombhu Mitra (specially invited by Raj Kapoor) to direct the film and Amit Moitra. Jagte Raho is one of two films directed by Mitra, the other being Subha Bibaha (1959). He is regarded one of most significant figures of 20th century Indian Theatre and is considered the greatest Bengali actor after Sisir Bhaduri, along with Ajitesh Bandhopadhyay and Utpal Dutt. The film shows Mitra’s pre-occupation with social justice and is a Chaplinesque denunciation of the petit-bourgeois who will not even offer a glass of water to a poor peasant lost by night in Calcutta. Like other films of the period – Do Bhiga Zameen (1953), Naukri (1954) and Shree 420 (1955) the film looks at the city as a nightmare. In fact the opening images are similar to those of first impresssions of Bombay in Shree 420 – the ‘closed’ nature of city life is placed in opposition to the ‘openness’ and simplicity of village life where everyone knows everyone else: an allegory to the inhuman nature of the city where undesirable villagers are hunted down mercilessly.Jagte Raho is an allegoric film about darkness and light, where darkness is the cloak of respectability under which a city supposedly sleeps but in effect thrashes around in the throes of crime and evil – a civilization gone to seed. It seems a night without end, but there is an end, the coming of a dawn at which the peasant discovers that the terrible darkness of the night is only half the truth but out of the suffocating darkness itself shall be born the dawn of a new day of truth and justice.The device of having the peasant run into an apartment block and then having to move from flat to flat to avoid being discovered is an ingenious device as we move from one milieu to another while giving the film a sense of movement. The irony of the film is that while he is thought to be a thief and is chased by the so called righteous petit-bourgeois, what he sees in the flats are far bigger crimes – moral, hypocritical and physical, committed by these ‘repectable’ people behind the four walls of their homes. The film sees one of Raj Kapoor’s most remembered performances as perhaps the best of his Chaplin inspired roles. Quoting British critic Geoff Brown:”Kapoor’s character is cut from Chaplin’s cloth. He starts out sharing food with a dog, squatting on the pavement, and spends most of the filma cting in pantomime, darting in and out of rooms, hiding in a drum, shinnying down a drainpipe, periodically pursued by a lively crowd of residents wielding anything from sticks to stringless tennis rackets. The result is one of Kapoor’s most diverting films.” However the scene stealer has to be Motilal playing the role of a drunk debauch with relish. Fine support comes from the rest of the ensemble cast.The other highlight of the film is undoubtedly Salil Choudhury’s musical score. Zindagi Khwaab Hai, the haunting Jaago Mohan Pyaare and the robust Punjabi Bhangra song Main Koi Jhoot Bholeya are the standout numbers of the film. An interesting aside: Shailendra convinced Salil Choudhury to compose Aaja re Pardesi from Madhumati (1958) from a piece of music used at the climax of Jagte Raho even though iniitially Bimal Roy opposed the move.Jagte Raho also sees the last appearance of Raj Kapoor and Nargis together on screen. Though Chori Chori (1955) was their last film as a hero-heroine, she makes a cameo at the end of Jagte Raho and it is fitting that she is finally the woman who quenches Raj Kapoor’s thirst and ending the film with an element of romantic humanism.A shortened version for the International market of Jagte Raho (115 minutes instead of 149)went on to win the Grand Prix at the prestigious Karlovy Vary Film Festival in 1957.Jagte Raho is one of those rare films which have stood the test of time and is in fact even more relevant in today’s times.

A HAPPY BAISAKHI TO YOU ALL !! BALLEY BALLEY !!

This entry was posted in Poetry in Golden Oldies, Social Commentry. Bookmark the permalink.

11 Responses to POETRY IN GOLDEN OLDIES ….